Partnerships are when 2 or more persons own and manage a business together for profit. There are many advantages of working in a partnership. For one, it utilizes the talents and skills of more than one person, giving a synergistic effect on the business. For instance, one partner may be good at making products for sale; another may be good at marketing it; yet another may be good at administrating the business. Partners are able to pool their financial resources (one person won’t have that much capital). While the rewards of the business will need to be shared between partners, the risks are shared as well. This type of business entity is also easier and less expensive to form compared to corporations, as well as being less formal and more flexible (as less members are involved in decision-making). Partnerships are not limited in terms of legal liability. In other words, if a partner does something (legally) wrong, ALL partners are considered to be at fault, and there is no limit as to the damages to be paid. In other words, if the business does not have enough funds invested in it to repay the damages, the partners will need to source for funds in their personal capacities. Also, any contract made by a partner is binding on all other partners.

Note: Contrast this with corporations with limited liability – a corporation will only ever need to pay damages to the extent of the funds invested in it, and no more.

Having said this, limited partnerships do exist. These are unique legal forms that provide partners who are not involved in the operations of the business with limited liability. However, there must be at least one general partner who operates the business, and the remaining partners will be considered limited partners.

As a business entity, a partnership is not taxed. However, if the business concern shows a profit, the shared profit will be counted towards the income of the individual partners, which is THEN taxed.

Partners usually operate based on an agreement which sets out, amongst other things: • Length of existence of business entity • Nature of business • Duties & responsibilities of the partners to each other & to others outside the firm • Amount of capital contributed by each partner • Profit/loss sharing arrangement • Partners’ salaries • Interest paid on partners’ capital & advances • Interest charged on drawings • What happens when a partner dies, retires, leaves or becomes bankrupt, or when a new partner is admitted

An example of how a statement of partnership equity looks like: 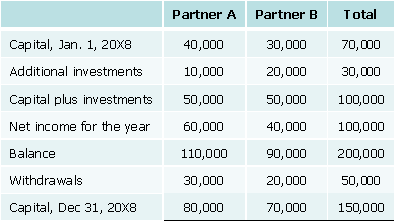 Sometimes, capital accounts are separated into fixed and current accounts.

Fixed capital accounts will record only the original capital amounts contributed, the balances of which will remain unchanged.

Let’s look into these items in more detail:

Sharing of profits or losses. Profits/losses can be shared on any agreed basis (stated in the partnership agreement), but they are usually based on fixed capital contributions. The sharing of the profits or losses are detailed in the profit and loss appropriation account. An example of one will be showed further down on this page.

Interest on capital. These represent payments to the partners on their capital contribution. The partner who contributes more capital will get a larger interest.

Partners’ salaries. These are usually paid to partners who contribute time in the management of the business. Sleeping partners are those who do not actively manage the business.


First, we prepare the Profit & Loss Appropriation Account, which is really an extension of the normal income statement, and shows how the net profit/loss is shared by partners. 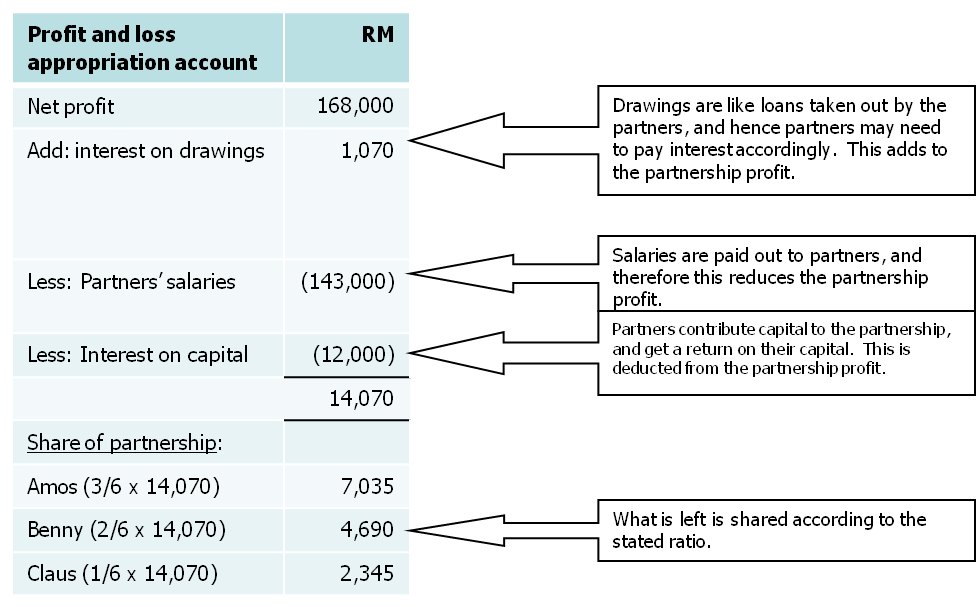 Then, the partners' capital accounts: 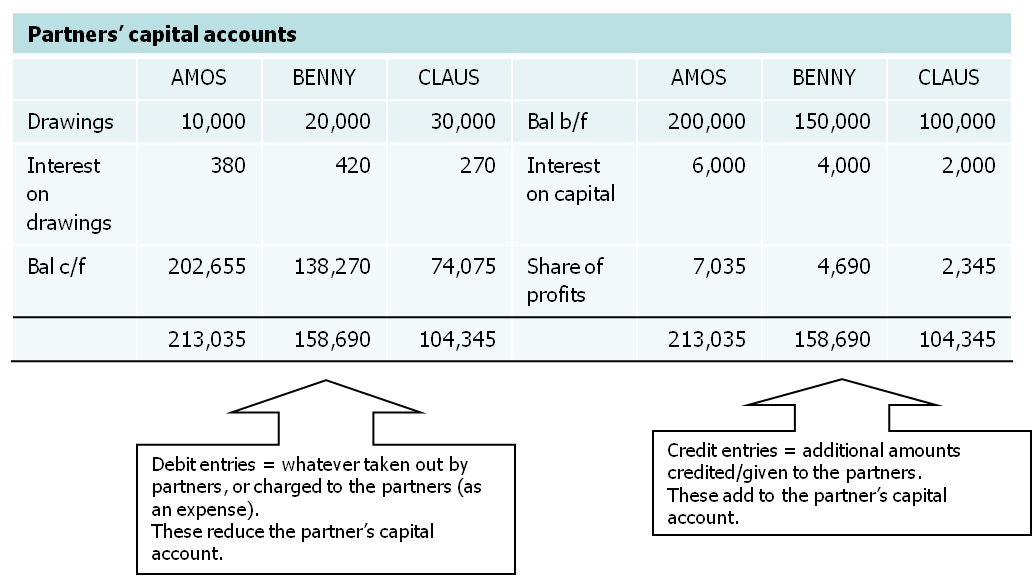 WORKING EXAMPLE 2 Xandria (X), Yasmin (Y) and Zaitun (Z) had the following trial balance extracted from the books of their business on 31.12.2011. The balances are stated BEFORE considering interest on capital and interest on drawings. 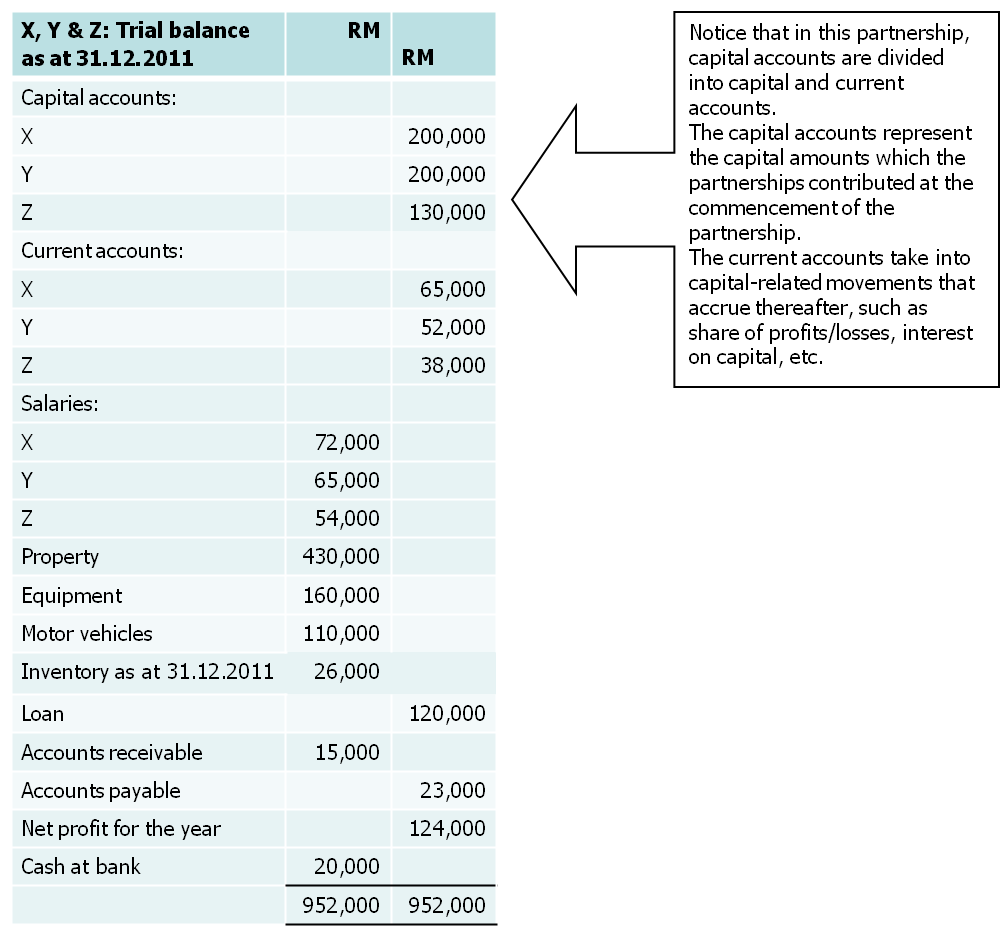 No entries were made in the books for the following matters:

Interest on capital will be equal to 5% of the balances in the capital accounts.

Interest on drawings were determined as RM1,200 for Xandria, RM1,200 for Yasmin and RM800 for Zaitun. 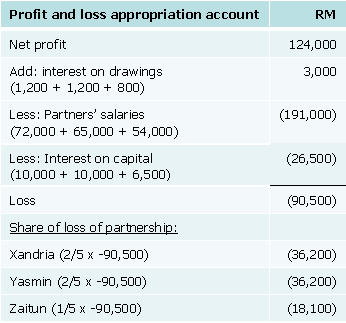 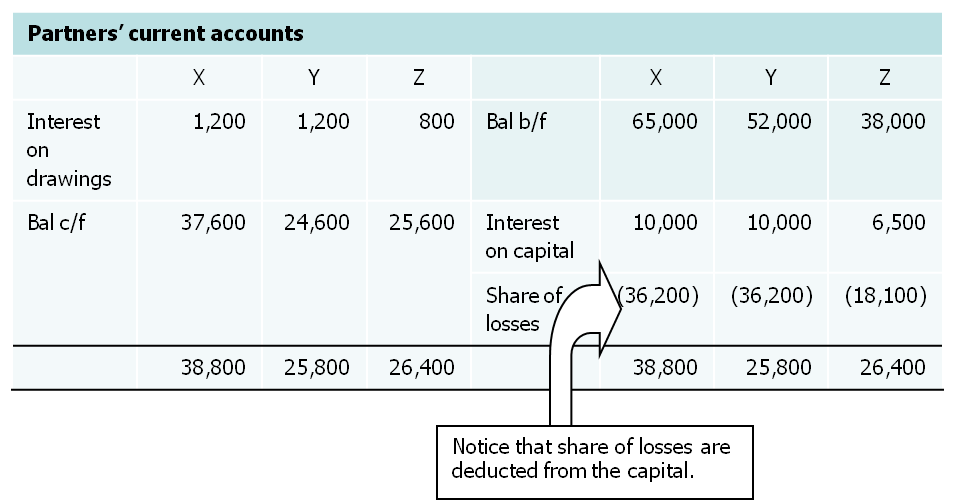