All about Clubs
(and Societies and other Non Profit Organisations)

Clubs (societies and generally, non-profit organisations) are entities that receive significant amounts of revenue from providers who do not receive equivalent amounts of services. In other words, people give money to such entities not because they expect a specific return, but because they want to help in furthering the entity’s cause. It can be in the form of prevention of animal cruelty (like the RSPCA), environmental and wildlife protection (like the WWF).

Hence, the aim of these organizations is not to run a business and earn a profit. These entities do not have owners like those of business entities.

Accounting for clubs and societies

The day-to-day accounting consists of maintaining 2 items only: 1. Cash book for recording receipts and payments, or the Receipts and Payments Book
2. Ledger for classification of transactions under proper headings.

The Receipts and Payments Book only shows cash that goes in, and cash that goes out. It does not show whether the club/society is able to meet its day-to-day expenses out of its income, and does not explain the details about the club/society’s expenses and income. In order to explain such questions, the treasurer prepares the Income and Expenditure Account and balance sheet.

The Income and Expenditure Account discloses whether the organisation has earned or lost, and is prepared on accrual basis (not on receipt basis), where all income and expenses are included (whether actually received/paid or not).

Some special accounting items which may appear in the Income and Expenditure Account include:

Legacy: Funds received via the will of a donor who has died.

Annual members’ subscriptions: Yearly fees paid by the members to maintain their membership.

Life membership fees: A lump sum and one-off payment for membership made by certain members. Such members do not need to pay annual subscriptions thereafter.

Honorarium: These are fees paid to people (usually experts in some area) who give lectures to members.

Donations: Funds given to and for a specific or general purpose, e.g. to help out in the event of a disaster.

Endowment fund: Funds given by a donor which are then placed into a fixed investment vehicle, e.g. a fixed deposit. The organisation then receives the investment/interest income to run its normal activities.

Proceeds of concerts, lectures and dramas or cultural shows: Very often, special fundraising events are organised and tickets are then sold to outsiders. Profits made will be added to the club/society funds.

The receipts and payments book of the ABC Sports Club as at 31 December 2011 showed the following:


The following balances as at 31 December are also relevant:

Prepare an Income and Expenditure Account for the ABC Sports Club for the year ended 31 December 2010.

First, we have to deal with members’ subscriptions:

Lastly, the balancing figure will be the members’ subscriptions actually earned in 2011: 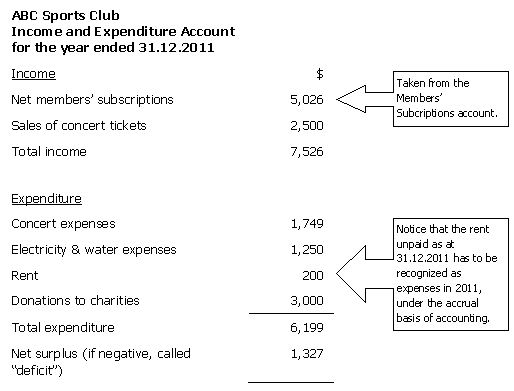